Hollywood Reporter – The actors talk about their preparation to play Pamela Anderson and Tommy Lee in the Hulu series.

Pam & Tommy stars Lily James and Sebastian Stan were just as shocked by their transformations into Pamela Anderson and Tommy Lee, respectively, as the rest of the world was.

“There was a conversation about me being involved really early on, and I was incredibly surprised — dumbfounded — and I suppose that spiked my curiosity that they thought of me for the part,” James told THR Presents, powered by Vision Media. “It was a complete mind-blowing shock for everyone. The first makeup test I had … we just sort of threw some stuff on to get a sense, and at the end, I was having a full panic attack and thinking, ‘I can’t do this, I can’t do this, I’m going to let everyone down, it’s the biggest embarrassment.’ Then the journey they took with prosthetic … I had a forehead piece, teeth and eyes. And when we needed it, I wore the entire chest piece, but like, it was mind-blowing what they achieved. And the same when I looked at Sebastian, we were able to completely exist and believe that we were these people and in turn do our best shot at really trying to and convincingly inhabit them and do them justice. And it was all linked. We couldn’t do one without the other. It was really quite extraordinary.”

James said she watched Anderson’s major interviews from the ’90s “to get her mannerisms — she talks like a million miles per hour and only stops to breathe.”

“I just tried to make it feel as personal and as spontaneous as I could, but also, having really studied and learned how she talks and moves, I trained so hard, lost tons of weight, — put it all back on — I worked with an amazing acting coach, I found her pitch on the piano,” explained James. “I really just wanted to do her justice and to try as much as I could to sort of emulate so that you feel that you catch an essence of who that person is as best as you possibly can.”

During the time of Pam & Tommy‘s release, there was a video circulating on social media that showed James doing 600 sit-ups a day to prepare for the role. However, James said that’s not quite accurate, as she did 600 sit-ups a day for another film she did called Fast Girls (2012) and not for the Hulu series.

For Stan, mimicking Tommy Lee’s drumming was the most daunting task in his preparation. “I’d never played drums at all. And I remember asking [director] Craig [Gillespie], ‘Are you gonna want to use a double or something?’ He was like, ‘uh, no.’ And so I started the drums on the weekends in Canada, trying to take weekend lessons. And then I remember, after a month, I sent him a video of me doing it and he was like, ‘yeah, it’s great. I just have to speed it up by about 100 frames, but should be OK,’” added Stan, laughing. “It was a combination of literally waking up in the morning, making coffee and running on an empty stomach and fasting for half the day, trying to get 20,000 steps to lose weight. And while I’m running, basically, I’m playing audio of every interview I’ve accumulated off of YouTube or the internet of him going all the way back to the ’80s to now, anything I could find to hear him all all over, then I’d get home, I’d watch videos.”

Stan said that he did karaoke one night and woke up to a raspy voice, which he thought perfectly encapsulated the voice he needed for Tommy Lee. “It sounds like I smoke 10,000 cigarettes. And then that manifested into screaming into a pillow to keep the raspiness and then I know Lily was doing it too. We would do four scenes and I’d be like, ‘You want the pillow?!’”

Pam & Tommy creator Robert Siegel was tasked with the challenge of making a show about two people who wanted no part in it.

“You read as much as you can,” said Siegel. “In this case, we had a lot more information about Tommy. We have, of course, Tommy’s autobiography, Tommyland, which provides a wealth of information. And then there’s court transcripts, which were really, really useful for the episode six deposition episode. And then once you’ve accumulated as much information as is out there, you just try to really do right by these people. We were always really diligent about trying to be on their side. Pam is definitively the hero of the story. We always wanted to be very clear that that this was a crime committed against them. You don’t know if they’re going to see the show, but you want to approach it as if they’re going to see the show.”

“Pam, in particular, but both of them were sort of our number one audience,” agreed D.V. DeVincentis, writer of three episodes of the show as well as executive producer. “But Pam, in particular, this was something she suffered the most from and really sort of survived in this completely self sufficient and kind of brilliant way in the way that she does. And we really wanted to show if we’re working with [telling] her whole life story, we want to at least show the way we see her and the way we still see her.”

In terms of taking creative liberty, Siegel said he stayed pretty true to the Rolling Stone article written by Amanda Chicago Lewis, which told the story of how the sex tape was stolen by a man named Rand Gauthier, played by Seth Rogen in the show. “We were pretty faithful to the article,” said Siegel. “There’s not much in the show that’s not in the article. I’m kind of proud. You’re always prepared for the possibility of making things up. A couple of things we definitely did make up, but for the most part, it’s what’s in the article.”

Added DeVincentis: “We’re not entirely certain that the the narrative that Rand Gauthier laid out in the article is necessarily true, but it’s a hell of a story.”

Note: The complete video interview is at the Hollywood Reporter link above. I’ve added screen captures to the gallery. 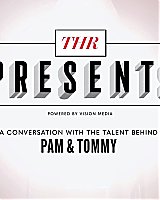 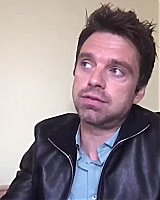 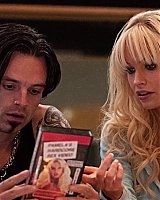