Gold Derby — Sebastian Stan (‘Pam and Tommy’) reveals trick to staying ‘at a level 10, no matter what’ while playing rock icon Tommy Lee

“I don’t play the drums, I don’t play any instrument,” confesses Sebastian Stan during our recent chat about his role as Mötley Crüe drummer Tommy Lee in the Hulu limited series “Pam and Tommy.” “I started taking drum lessons in January, about two-and-a-half months before we started. Everything about it was terrifying. It felt like big shoes to fill on every level. Personality-wise, certainly reputation-wise. Whether it was going to be believable. The idea of just going there was sort of terrifying.” Watch our exclusive video interview above.

Based on the 2014 Rolling Stone article “Pam and Tommy: The Untold Story of the World’s Most Infamous Sex Tape” by Amanda Chicago Lewis, the Hulu series follows the turbulent marriage of actress Pamela Anderson (played by Lily James) and Lee after their honeymoon sex tape is stolen and eventually launched on the internet for millions to see.

“The sex tape is the easiest thing to point the finger to, but then as you peel it apart you realize there’s all these other layers to it and there’s something extremely timely to it,” Stan says. “This celebrity obsession really started kicking up to a different level in the 90s. That has really percolated until today, including the loss of privacy and how we’re all affected by the internet and the parts that we play in it, anonymously. And the parts that the media plays, as well, shaping narratives that are not true.”

The actor says keeping up with Lee’s energy took a few tricks of his own. “He was always at a level 10, no matter what,” Stan explains. “That’s how he was written in the script and, if you look at the interviews, it almost feels like he’s always listening to a piece of music. Or he’s constantly almost at the drums even when he’s not playing. I tried [an] earpiece device that I had throughout the scenes and I would always have music playing in my head. There were some things you learn to rely on to get you there, but it is tough. It’s not you. You’re handed a life and you’re told, ‘Go fit into that somehow,’ and you don’t always know if you will or not.”

Note: The complete video interview is at the GoldDerby link above. I’ve added screen captures to the gallery. 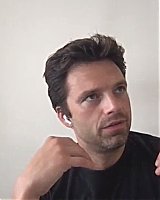 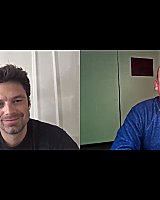 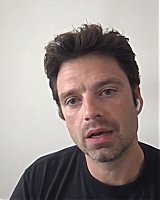