Press/Photos: Sebastian to British GQ “Race, identity, patriotism… This is Marvel’s most relevant show yet” 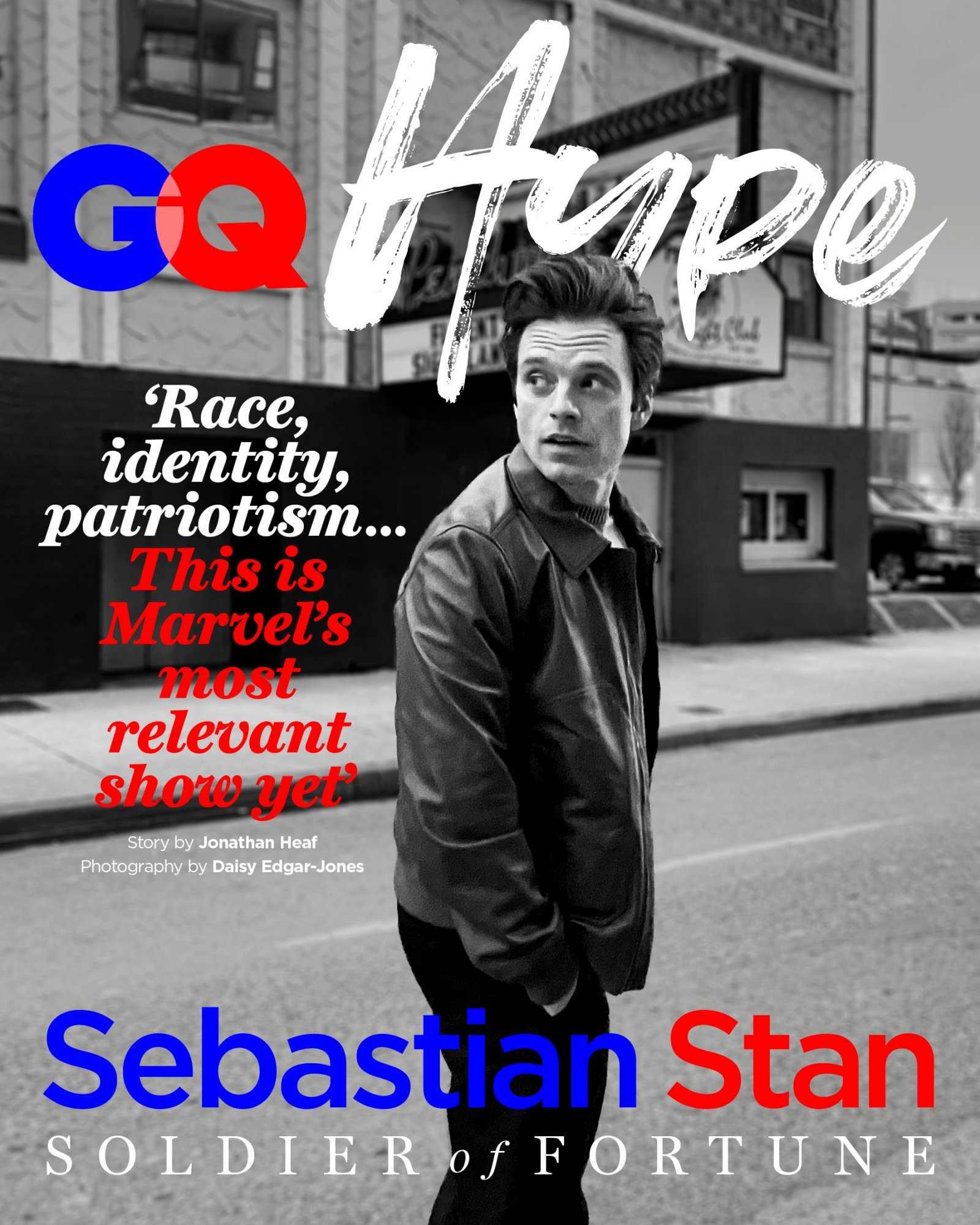 GQ-Magazine.co.uk — Even as our backsides became numb and our eyes mere bloodshot arrow slits, at the very end of Avengers: Endgame, Sebastian Stan (as Bucky Barnes, the Winter Soldier) stayed true to form, keeping stoic and, largely, shtum.

While Anthony Mackie, in the role of Sam Wilson/The Falcon, was handed Captain America’s famous vibranium frisbee by a very wrinkly but very happy Chris Evans – thus becoming, for now, the MCU’s next Cap’ – all the dewy-eyed audience got from our favourite, oft-scowling tough guy was a modest nod of approval. No air punch. Not so much as a celebratory grunt. Stan as The Winter Soldier is nothing if not the very strong, very silent type.

Today, reminiscing freely about that last scene he had to play in Marvel’s multibillion-dollar-shifting Infinity Saga – Thanos defeated, Hulk with a sore hand, Tony Stark (*sob*) deceased, multiverse opened and unhinged – Stan explains how the germ of an idea for their new spinoff, The Falcon And The Winter Soldier, now streaming on Disney+, began to take shape. “This wasn’t something long planned, not at all,” he says, laughing, when I suggest super-producer Kevin Feige – Marvel’s boardroom-based end-of-level boss – may well have had Mackie and Stan’s on-screen partnership in the pipeline for years.

“Maybe Kevin did, but he didn’t tell me about it. But once Anthony and I realised these changes were taking place to the storyline in Endgame, in particular to the story of Captain America, I think both of us sort of looked at one another and thought, ‘Well, we’re still here! We’re not dead! So, what happens to us now?’” 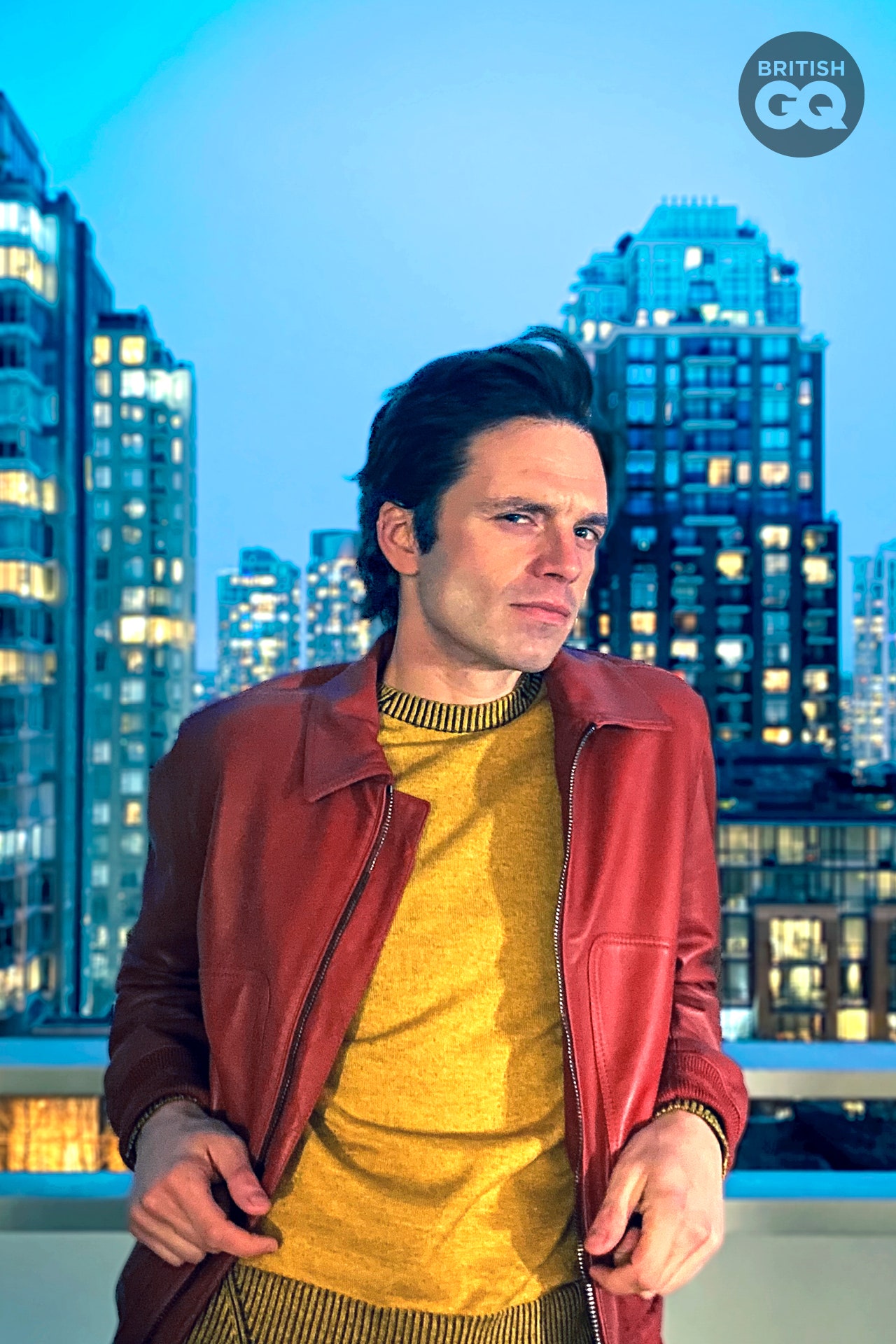 Naturally, almost unflinchingly, Marvel’s “not-so-random successful movie generator” had a decent answer: “This show is a revival, in spirit at least, of some of those buddy comedies that were so popular in the 1980s.” Think Lethal Weapon – just with more capes and a bigger pyro budget.

“Anthony and I both get a kick out of working together; we always have a lot of fun. Also, this show is six hour-long episodes, which gives us a lot more to play with than a two-hour film. ‘Buddy’ walked out of that last film with an identity crisis, so there’s a lot to dive into.”

Stan pauses momentarily, chuckling to himself. He stares off camera to his left, something he does sporadically throughout our chat, like he needs a horizon in order to contemplate certain answers. We’re Zooming, natch, he in Vancouver shooting Fresh with Daisy Edgar-Jones – who was kind enough to take these photographs of Stan, exclusively for British GQ – and me in darkest North London nursing a Heineken 0.0.

Stan lifts a flat cap, scrapes back a full hand of jet-black hair. Although his accent rolls in deep and direct from New York City, the actor was in fact born in communist Romania, where he witnessed his parents struggle through the revolution. He spent time in Vienna too, before emigrating to the States with his mother aged 12.

“Actually, now we’ve got these longer scenes together, there’s a lot more dialogue between us.” You make it sound like that is a problem, I say. “Well, in a way it’s the bit that worried me the most. Not as an actor, per se, but as a fan of the character.” How come? “Well, Winter Soldier and Falcon have worked together best when they’ve had little to say to one another. We’re good at quips. So, now, what are they going to say to one another?”

This sounds somewhat trivial but Winter Soldier’s entire thing – as the man who has walked, run and generally caused mayhem in his boots since 2011 knows only too well – is a very nonchalant, 1950s sort of sullenness. “He’s been silent for, well, almost all the movies and that’s what made him cool. He was cool because he didn’t open his mouth, a sort of less-is-more, brainwashed assassin.

“For this show I had to find his voice, in all senses, and do it in a way that was timely to what is going on in 2021.” Timely, how so? Stan is emphatic: “Look, you can’t do a show that explores the title of Captain America without touching on some of the stuff we have seen on the news. In fact, I would argue this is Marvel’s most relevant show yet.” 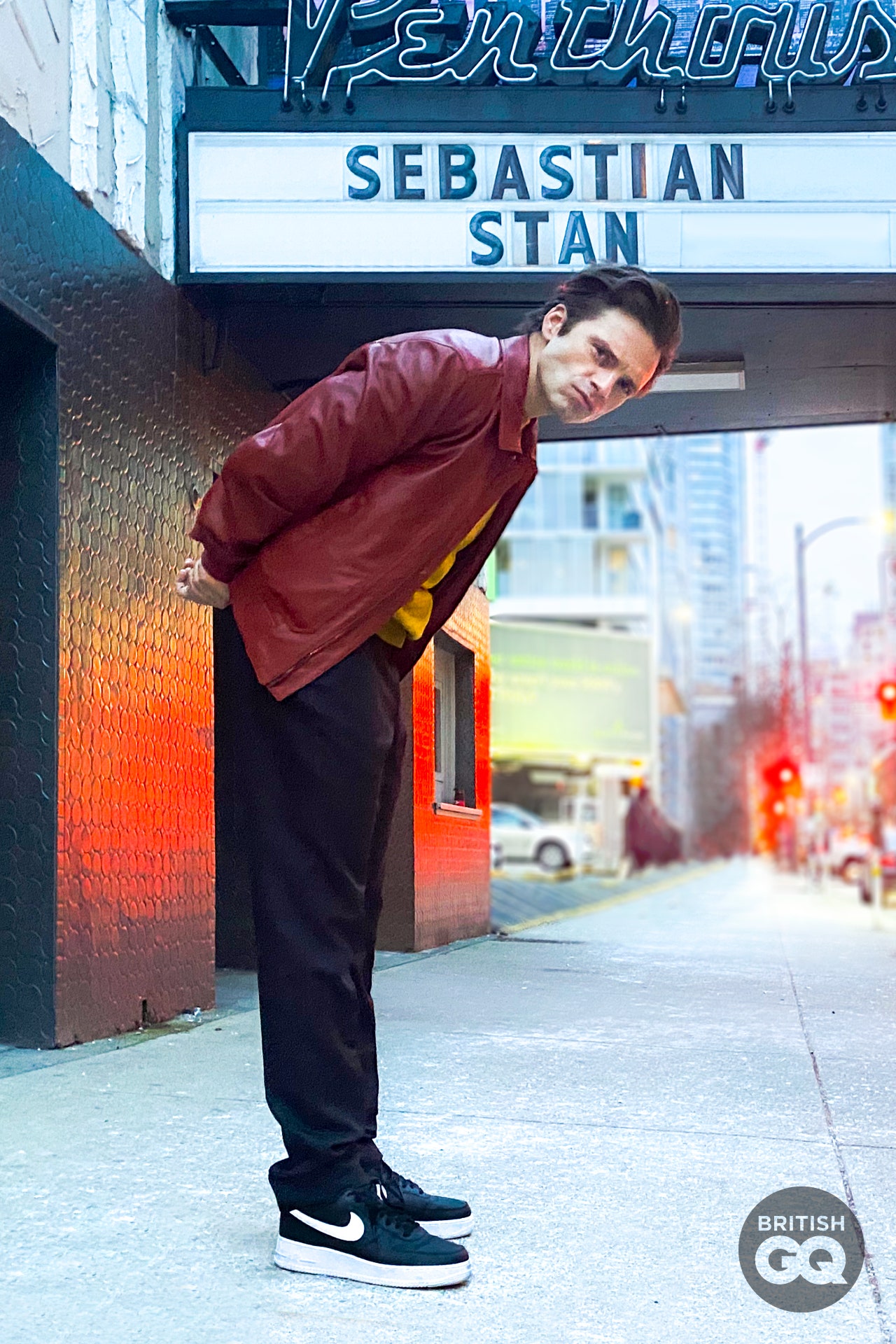 Stan continues: “Race, identity, patriotism… these issues have invariably boiled over into all our lives these past 12 months.” As the actor tells me, these issues were already due to be dealt with, somewhat prophetically, in this new spinoff.

When screenwriter Malcolm Spellman was announced in 2018 as the man who would begin to develop the series on page, it was underlined that race, in particular, would be something raised and dealt with by these characters. Of course, the only thing no one could have predicted, not even the marvellous Marvel machine, is how pungent the topics would become throughout 2020.

“We started filming The Falcon And The Winter Soldier in September 2019, I believe,” explains Stan, “and the scripts were already touching on all this stuff. Yet, as we filmed and developed, the delays pushing us into 2020, the world began catching up to certain things being explored. It became an even trippier experience for all of us. It also gave us a feeling of a much larger moral responsibility and I think, for me – certainly for Anthony, but also myself to a certain extent – work wasn’t just going to ‘work’ any longer. It felt like a real opportunity to ask questions, not only of the characters but also of ourselves and the audience.”

I ask Stan how important the idea of a black Captain American is at the moment; it’s been rumoured that Stan’s character feels a certain niggling ambition that he, too, would like to take up the shield and mantle from his old best pal.

“A black Captain America is an incredibly powerful symbol, for all those reasons we were discussing, but also he was the right man from a character standpoint [to] take the shield, regardless of race. Bucky wouldn’t be emotionally intelligent enough or mentally stable enough to be able to handle such huge shoes. His moral compass is somewhat questionable too.”

Stan found that these parallels to real-life events only made the fictional world being developed on set feel more relevant – precisely what one yearns for as an actor. “Take Covid, for example. With the ‘Blip’ that happens at the end of Infinity War, Hulk reversing the deaths caused by Thanos, the idea of a big, tragic event with a long, dark, menacing shadow falling over everything since, you can see similarities here with the pandemic.

“Also what happened at the Capitol in the States just these past months. I mean, sometimes you watch the news and you don’t know what’s real or what’s not, right? But full credit to Marvel: it manages to touch on all the important topics while remaining entertainment, albeit entertainment with a message. It’s not like we have set out to lecture anyone.”

You’d think Stan would be done contemplating the complexities of a character that he first stepped into in 2011 with Captain America: The First Avenger. In fact, as far as Marvel OGs go, The Winter Soldier is one of the very last heroes still swinging. “A friend of mine was saying, ‘It’s basically you and Thor left now.’ Look, I haven’t spent the time working it out, but if you think about it, between Robert [Downey Jr] as Iron Man [gone] and Chris [Evans], there aren’t many of the very first original characters left. Me and [Chris] Hemsworth might be the oldest ones around – which, I mean, I couldn’t be more thankful for!” 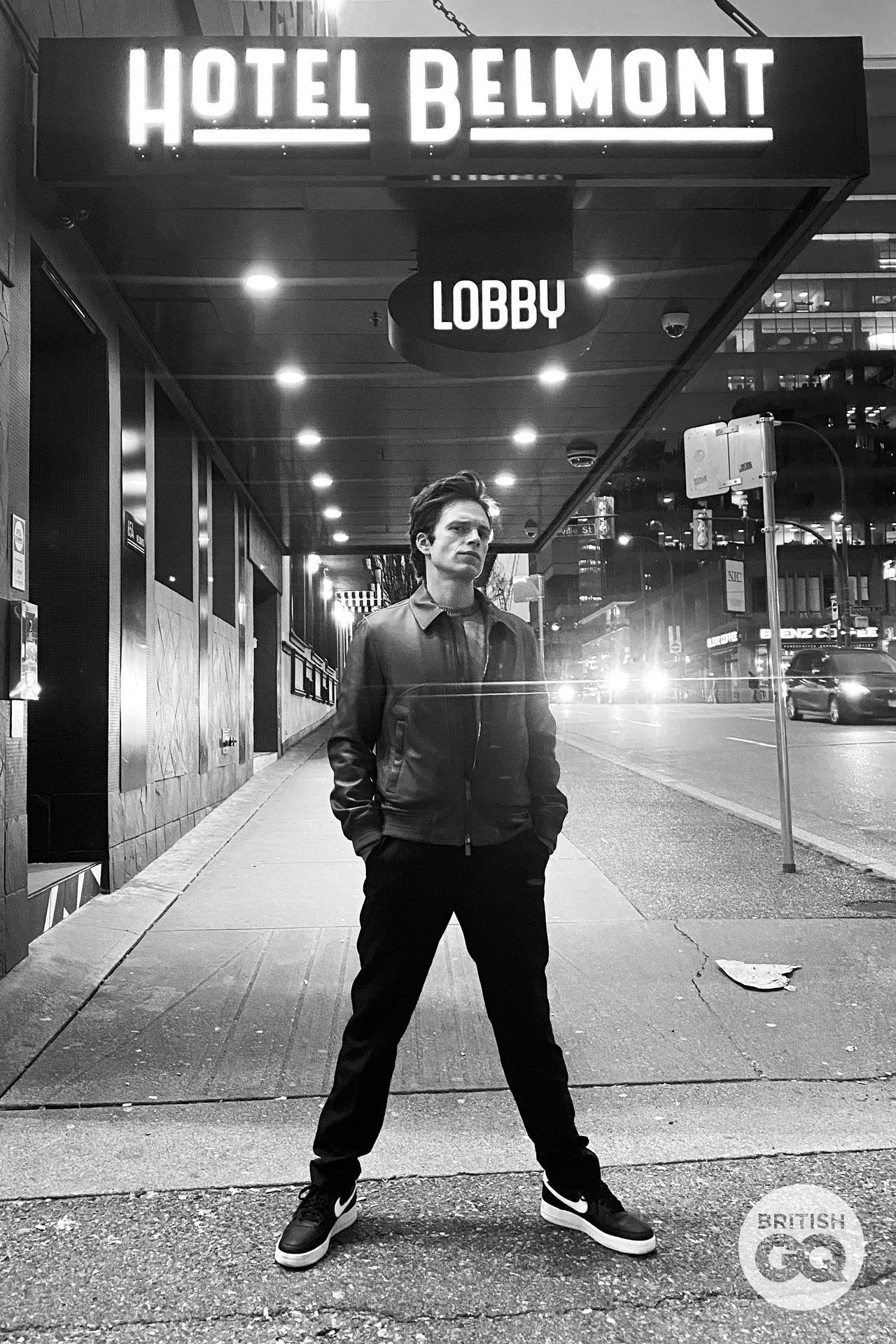 He must have pondered his own character’s death, though, surely? “Of course. Look, whenever you’re involved in a Marvel project, whatever year, film or show, it’s always the same process: whatever country you are in, even with Covid, there are two people who show up with a sealed brown envelope. They sit there and hand you this thing and it feels like Pulp Fiction or something.”

Are they two burley security guards? “God, no!” says Stan, laughing. “It’s usually one terrified intern who had to fly with this thing on their lap and they’re just so happy to get rid of it so they don’t have to worry about it any more. You sit there and open a file and there’s a script and then you’re like, ‘Oh, God. I hope I make it to the end!’ And every time you think, ‘This is gonna be it…’ And, so far, those experiences have felt like Christmas morning. But when it’s time, it’s time, you know?”

Santa’s been good to Sebastian Stan: hey, we stan Stan. But you know what they say: it’s always the quiet ones you got to watch.

The Falcon And The Winter Soldier is streaming now on Disney+.

1 Comment on “Press/Photos: Sebastian to British GQ “Race, identity, patriotism… This is Marvel’s most relevant show yet””