In January of this year, while filming I, Tonya, Sebastian Stan dropped into a bar to meet up with a bunch of his Marvel co-stars in Atlanta. These are people he’s known since at least 2010, when he was cast as Bucky Barnes in Captain America: The First Avenger, a film that propelled one of the biggest movie franchises in modern history and Stan’s own career. Since that first Captain America film, he’s repeated the role in its two sequels; he’s also slated to appear in the upcoming Avengers: Infinity War, which began filming earlier this year. He’s pretty good friends with some of the most recognizable superhero movie stars on the planet. They’re his people.

But when he walked into the middle of the bar, no one knew who the hell he was.

“I went and stood in the center of where everyone was hanging out and I realized that no one recognized me,” Stan says. “I had this haircut that was really high, a mustache and no sideburns, and I was very pale. I stood there for a minute before I went up to someone and was like, ‘Hey, it’s me.’”

You can’t really blame them, either. In I, Tonya, Stan looks almost nothing like the rugged and brooding Bucky Barnes. He transforms into the slimy Jeff Gillooly, Tonya Harding’s estranged husband and a figure skating villain who served time in prison for his involvement in the infamous attack on Nancy Kerrigan ahead of the 1994 Winter Olympics. Along with the short hair and mustache, Stan assumes Gillooly’s meek-until-explosive temperament and his soft, delicate voice. It’s a chilling likeness to the man who helped destroy the career of one of the greatest figure skaters of all time—but allowed her to take most of the public’s blame. 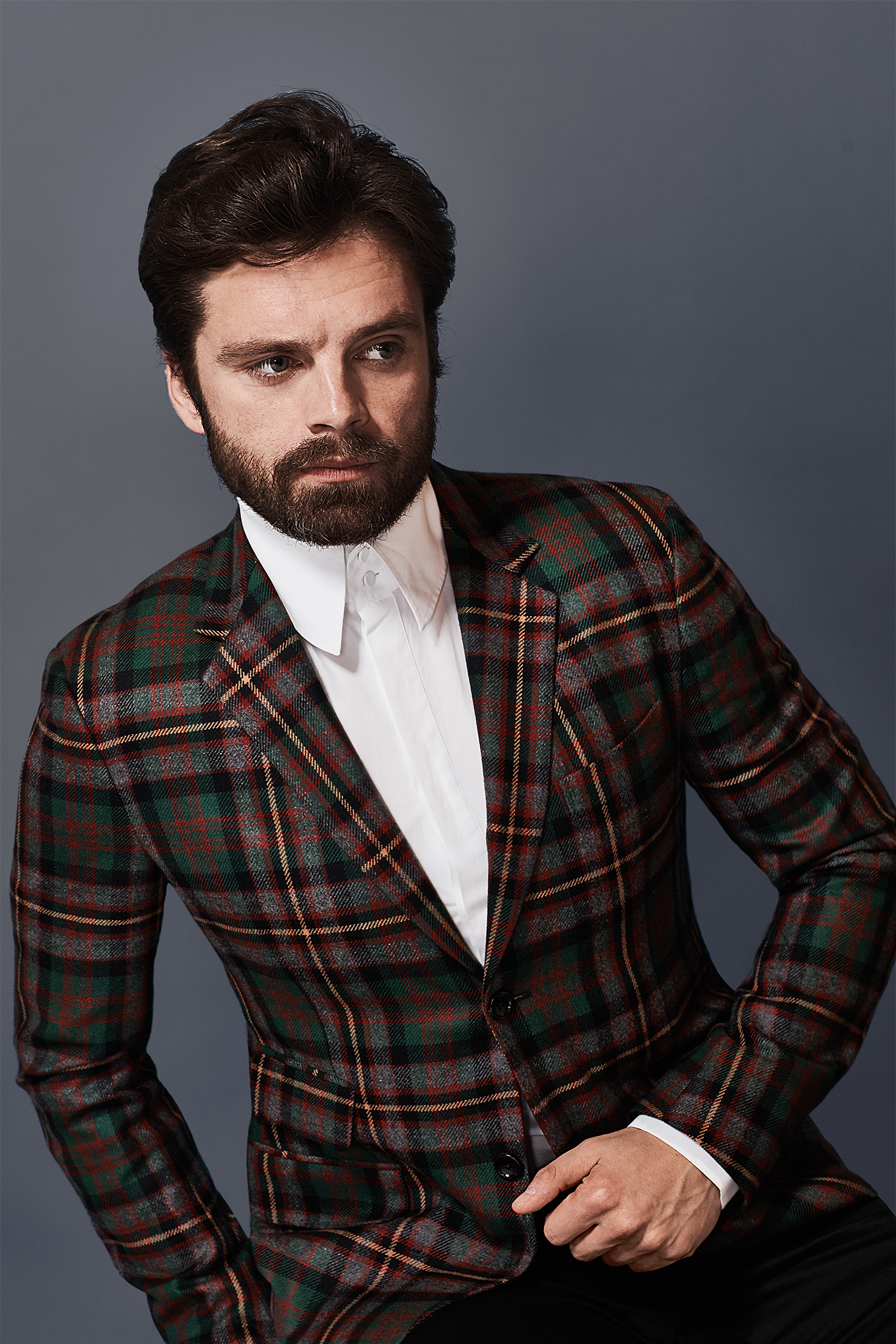 In fact, if I hadn’t known it was Stan playing Gillooly, I might not have even recognized the world-famous Marvel actor—a confession he’s glad to hear.

“You’re always hoping to disappear in something,” Stan says, accepting the compliment. In order to dive deep into the character, he spent a month and a half listening to interviews with Jeff Gillooly. He also watched any footage he could find, and he eventually traveled to Portland, Oregon, where he spent three hours chatting with Gillooly—who changed his name to Jeff Stone—at a nice Mexican restaurant in town.

Stan admits he was nervous to meet the almost-forgotten Gillooly; one might imagine Jeff Stone might have had the same trepidation. “At that point, the only thing I really cared about was physicality, mannerisms, anything that I could see that I picked up from him,” Stan says. “The first thing he asked me was, ‘Why would anyone want to do this? Why would anyone want to see this movie? Why did you decide that you want to be in this movie?’ My impression was that it must be very strange for him to want to revisit that story. I don’t think it’s anything that he wants to talk about.”

Yet the Tonya Harding saga, all these years later, is still something a lot of people really do want to talk about. I, Tonya, which takes a surprisingly comic approach to the figure skater’s life story, is framed by interviews with its leading players. Presented as talking heads in a faux-documentary, Margot Robbie’s Harding, Stan’s Gillooly, and Allison Janney’s LaVona Fay Golden (Harding’s mother) take turns narrating the larger story of Harding’s rise and fall—and then another rise and fall—in competitive figure skating, culminating in Harding’s ultimately disappointing performance in Lillehammer and her ban from the United States Figure Skating Association.

This Rashomon-style take on a salacious tabloid story attempts to show that, beyond the media frenzy that abused Harding’s image and laid the groundwork for what became our exhausting and overwhelming 24-hour news cycle, the story of the events are still somewhat complicated. “There’s no such thing as truth. I mean, It’s bullshit,” Robbie’s Harding says in the film. The unreliable narrators only reiterate that theme, with conflicting accounts of the attack on Kerrigan, the abuse Harding suffered from her mother and her husband, and the subjectivity with which Harding’s many judges viewed her athleticism and class standing. 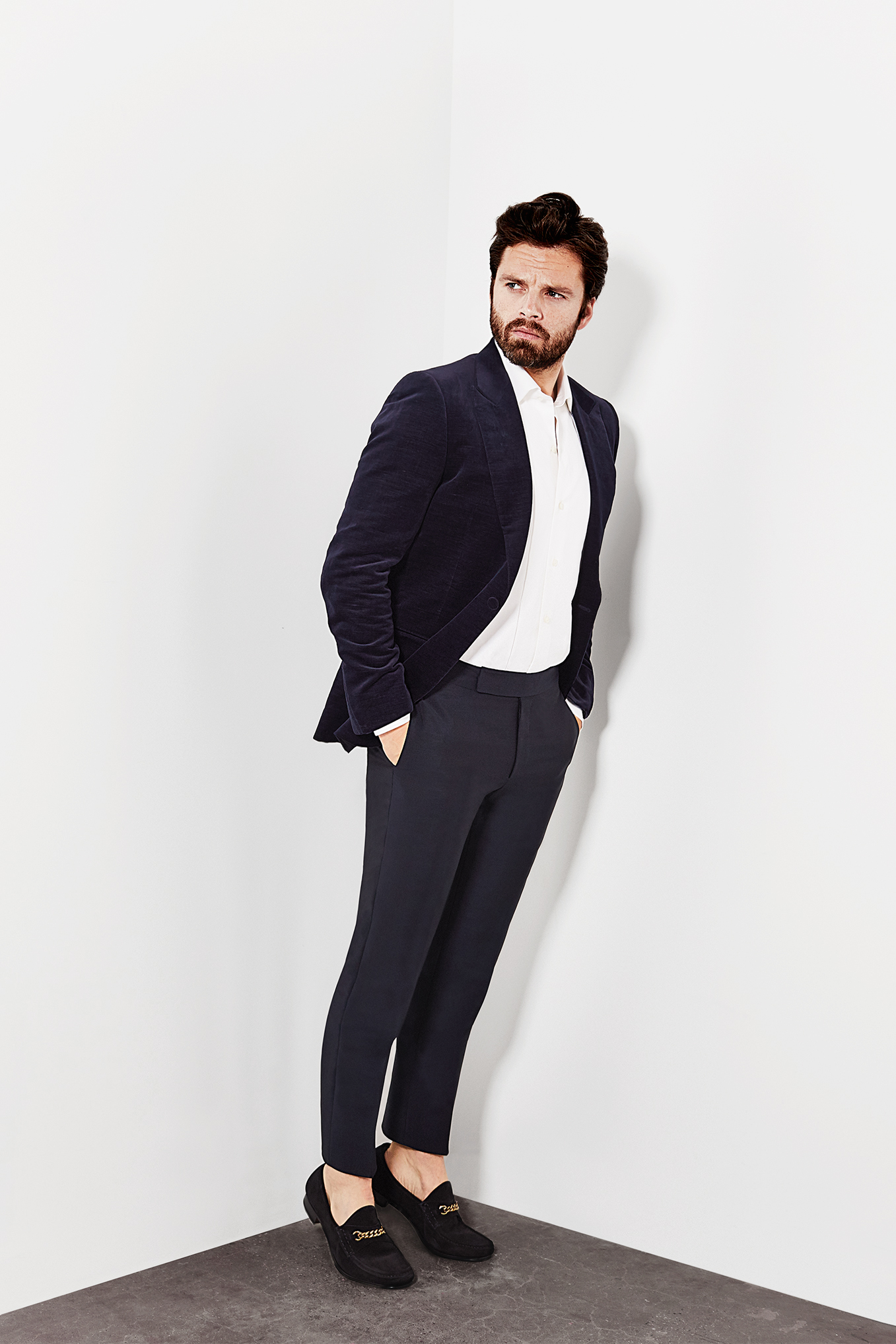 Gillooly is a challenging character to play both morally and in terms of physical imitation. Yet, Stan does exactly what he needs to, which is to take some of the blame away from Harding in a re-examination of the Kerrigan attack. The film poses Harding as the victim at the hands of the media, the figure skating community, poverty, her mother, and Gillooly’s toxic masculinity. In terms of performance, Stan shines alongside Margot Robbie’s brilliant, sympathetic, and Oscar-worthy portrayal of Harding, with his own character rife with complications.

While I, Tonya examines the athlete’s life and career with a wide lens, its most intimate moments—shared between Stan and Robbie—are at times the most harrowing. The dark comedic tone of the film has been polarizing for critics and audiences, but they represent screenwriter Steven Rogers’s (not that Steven Rogers) attempts to show their relationship from the “wildly contradictory” interviews with Harding and Gillooly. That means we see Harding’s accusations of intense domestic abuse as well as Gillooly’s version—in which he insists he was a supportive husband to his selfish wife. Stan admits those parts in the narrative were uncomfortable to film as they are to watch. “It was very difficult with me for this role,” he says, “because it was hard to pull off those scenes.”

Despite the awkwardness of filming the more violent moments, the actor says he’s grateful that he had Robbie there to work through some of the complexity of these scenes. “There were a lot of times where we would just laugh at each other—not because of the content, but because we were both struggling to show up and make it believable. We’re not these people. How do we make it believable?” Stan says. “There was a time in the car and we were shooting a scene at, like, 3:00 a.m. It was very serious. We were setting up; I was in this white turtleneck, and Margot was in the passenger seat with fake blood all over her face. I looked over at her and was like, ‘Hey, how are you doing?’ She said, ‘I’m good, how are you?” And then she laughed and said, ‘Who have we become?’”

This is a movie that comes at a pivotal time when the media and entertainment industry is focused on exposing abusive men in positions of power. That makes I, Tonya especially unsettling to watch. But Stan hopes that some of the more brutal scenes help spark a conversation about this revolution against the patriarchy. 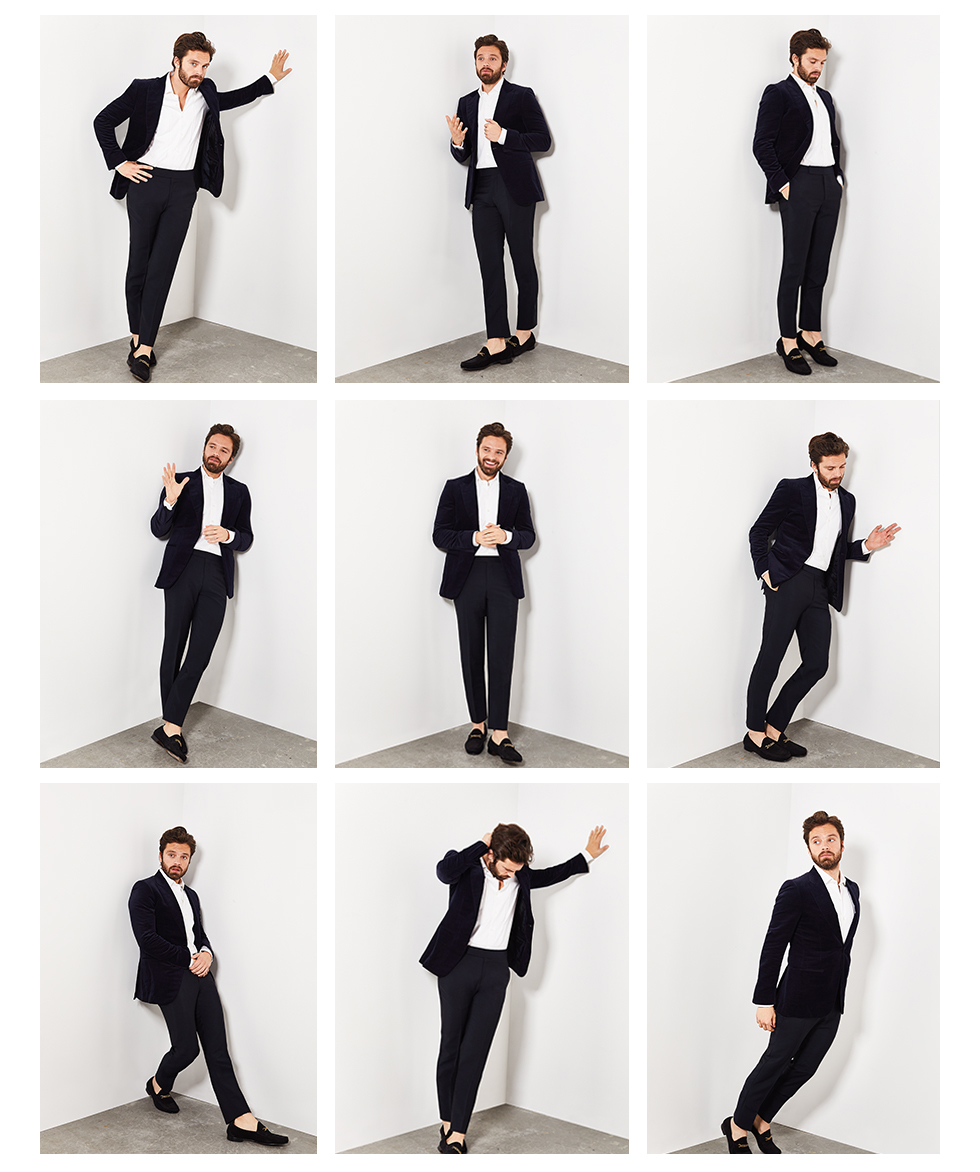 “It would be a very lonely world if you, as a man, had to resort to that kind of behavior in order to feel value, in order to feel like you’re taken seriously. It’s cowardly,” he says. “It’s clear to me that only someone who feels extremely emasculated could possibly behave like that. What does it say about masculinity? Now is the time more than ever for us to review what masculinity is about. Violence has always been unfortunately embedded in masculinity, this alpha thing. It’s more complicated than that.”

Even in his Marvel career, Stan has been able to analyze the complexities of masculinity in his acting. In terms of comic book characters, Bucky Barnes is one of the more dynamic in the universe: he’s Captain America’s childhood friend and a comrade who is re-programmed into the mysterious assassin known as the Winter Soldier. At times a villain, at times a hero, Stan’s Barnes represents the spectrum of good and evil, where men have the ability to do great or terrible things. That Marvel character has acted as a base for Stan to jump into more serious drama like I, Tonya. 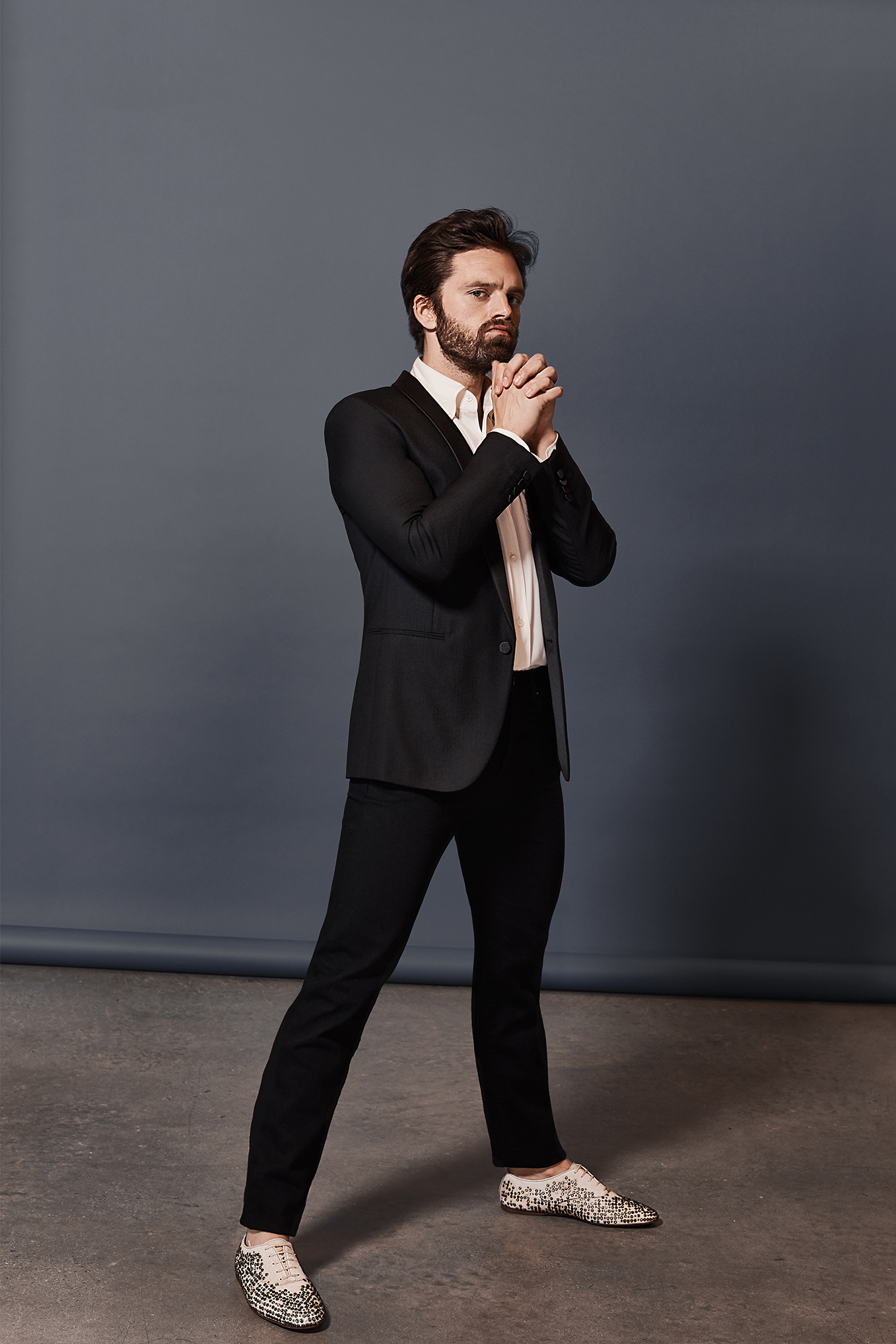 The film comes at a key moment in Stan’s own career in which the success of the Marvel movies have given him the opportunity to explore more challenging projects like this. Next, he’s working on an Los Angeles-set film noir from director Karyn Kusama, one in which he and Nicole Kidman play undercover cops who infiltrate a cult. But Marvel is still very much in the picture, and when I ask if he’s ever considered a Bucky stand-alone movie, he nearly jumps out of his chair. “I don’t know when—knock on wood—that would be an amazing experience,” he says. “I’d be up for it whenever. There’s definitely a lot there to be explored. It’s fun, and the guy has got some identity issues.”

And speaking of Stan starring in spin-offs of massive action properties: on the day before we chat, a photoshopped image of the actor as Luke Skywalker goes viral on Reddit. It’s so convincing that Mark Hamill even started referring to Stan as “his son.”

“I feel like I have some sort of his blessing,” Stan says. “I didn’t even realize it actually, I used to love Luke Skywalker when I was younger. Then a friend said to me, they’ve already done young Luke Skywalker, so you would be middle-aged Luke Skywalker.”

What about the gap between Return of the Jedi and The Force Awakens, Stan muses? “That’s where I’d come in.”

He’d likely disappear into that role, too. And now is definitely the time, when we can find some value in a man who can play both heroes and villains with the critical eye that Stan brings to both.

0   |   Leave a Comment
Published by Carol
Previous Post Cinema Blend: The ‘I, Tonya’ Moment That Sebastian Stan Was Surprised To Learn Was Actually Real
Next Post Variety: Sebastian Stan Talks Jeff Gilooly, Mustaches and ‘I, Tonya’