Congratulations to Sebastian! I hope all goes well and he gets to be apart of this project. Sounds fascinating! 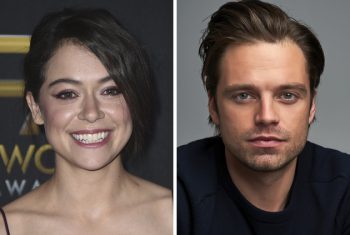 Tatiana Maslany, who won an Emmy for her role in Orphan Black, and Sebastian Stan from the Captain America and Avengers franchises along with the Oscar-buzzed-about I, Tonya, are in negotiations to join Nicole Kidman in the crime thriller Destroyer. The feature is being directed by Karyn Kusama from an original screenplay by Phil Hay and Matt Manfredi. 30WEST is fully financing the film with Fred Berger of Automatik, who will be producing alongside Hay and Manfredi.

This brings the team together of Kusama, Hay and Manfredi who were behind the critically acclaimed 2015 film The Invitation.

Destroyer follows the moral and existential odyssey of LAPD detective Erin Bell who, as a young cop, was placed undercover with a gang in the California desert with tragic results. When the leader of that gang re-emerges many years later, she must work her way back through the remaining members and into her own history with them to finally reckon with the demons that destroyed her past.

Rocket Science is handling international sales, which began at the American Film Market, where Bliss Media acquired the distribution rights to Destroyer in China. ICM Partners and CAA are representing the North American rights.

The BBC America’s Orphan Black (for which Maslany won an Emmy) finished its five-series run earlier this year. Most recently, the actress starred alongside Jake Gyllenhaal in Lionsgate’s Stronger, and has also appeared in films such as The Other Half, Two Lovers and a Bear, Woman in Gold, and The Vow.

Stan portrays Tonya Harding’s disgraced husband, Jeff Gilooly in I, Tonya. 30WEST will co-distribute the film with Neon on Dec. 8th. The actor is currently filming the next installation of the Avengers series and will reprise his role of Bucky Barnes in The Winter Soldier in Avengers: Infinity War next spring. Stan has also appeared in I’m Not Here, Logan Lucky, The Martian and Black Swan.