Sebastian Stan Goes for Comedy Gold in ‘The Bronze’

Millions of moviegoers will soon watch Sebastian Stan (as Bucky Barnes, aka the Winter Soldier) mix it up in the Marvel superhero-battle flick “Captain America: Civil War,” out May 7. But this Friday, he’s in a different type of battle as the cocky antagonist of the vulgar gymnastics comedy “The Bronze.”

“Both Melissa’s character and my character are adult children who never grew up,” says the 33-year-old actor. “They’re both stomping their feet and going, ‘I deserve what I deserve,’ because they didn’t really have childhoods.” 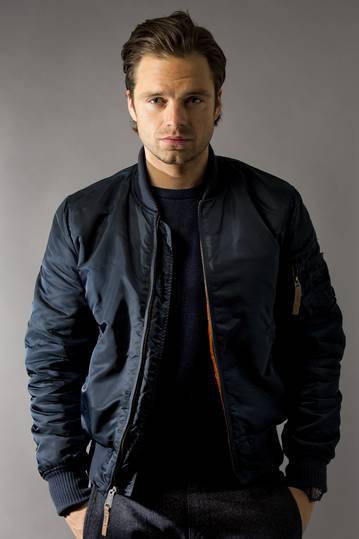 Stan talked to Speakeasy about other aspects of his role in “The Bronze,” including its buzzed-about sex scene, as well his college days, his pro-wrestling fandom, and what’s next for him – and what we can expect from Marvel Studios films starting with “Civil War.”

Stan based his “Bronze” performance on real people, some of them jerks.

The actor says he modeled much of his character’s mannerisms on someone he met, although he was worried that the person would see the movie and recognize that Stan’s arrogant bully of a character was in part based on him. “Can’t judge a book by its cover, but this individual ended up being the sweetest person in the world,” Stan says, adding that he was also inspired by jerks he went to high school and college with.

“The Bronze” sex scene was a challenge in more ways than one.

A movie featuring a sex scene involving gymnasts has to involve some, well, gymnastics. Stan said he tried to do as many flips and moves as possible while being mostly naked, with the exception of a sock covering his genitals, in front of the crew. “And you’d be surprised by what you’re capable of once you’re on the spot,” he says. “It’s almost like you rise to the challenge, no pun intended.”

When asked about how “The Bronze” compares to “The Wrestler” – another, albeit much more serious movie about a washed-up athlete struggling to stay relevant – Stan lights up. “I used to love wrestling growing up,” he says. “I was into WWF, which is what we called it back then.” Mr. Perfect (aka Curt Hennig, who died in 2003 at age 44) was one of his favorites. “The Perfect-Plex was the most intense maneuver,” Stan says.

Stan’s acting school came with a side-dish of grease.

When he was getting ready to go to college, Stan had his heart set on attending the Tisch School of the Arts at New York University. It was the only school he applied to, but when he didn’t get in, he had to scramble to find another school. “It was either Rutgers or Sarah Lawrence for me,” he says, noting the latter’s renowned writing program. “I had a back and forth. It’s like a marriage that keeps on going on and off for years, the writing.”

The acting bug won out, though, so he auditioned and enrolled at Rutgers’s Mason Gross School of the Arts in New Jersey. “The Fat Cat sandwiches were really great,” Stan says, referring to the fast-food sandwiches sold at the famous “grease trucks” found on the university’s campuses. “They were a really big sell.”

Get ready for a new tone from Marvel Studios movies.

Stan can’t divulge any details about “Captain America: Civil War,” in which the good guys are divided and fighting each other, but he will tease that Marvel, known for its colorful and snappy superhero epics, is starting to do things a little differently. “We’re heading for a different vibe of films from them,” he says.

The actor recalls a “teeny inkling of hope” that he’d be a player in the Marvel Cinematic Universe when he first appeared in 2010’s “Captain America: The First Avenger.” “I felt like I was in the freshman class, and the Avengers were like the big, tough seniors,” he says. “So coming from that [to] suddenly pointing a gun at Robert Downey Jr. [in ‘Civil War’], you’re like, ‘How’d that happen?’”

Stan is doing more comedy, thanks to a new Showtime series.

The actor says he will play a comedian loosely based on Freddie Prinze (“Chico and the Man”) in “I’m Dying Up Here,” a Jim Carrey-produced series recently picked up by Showtime. The show, based on the 2009 nonfiction book of the same name by William Knoedelseder, is inspired by the famous Comedy Store comedy club in Los Angeles during the 1970s, when budding stars such as David Letterman, Jay Leno, Elayne Boosler and Robin Williams made their mark. “I got to be a little bit of a standup comic, which is probably the most terrifying thing in the world,” Stan says, referring to his work shooting the pilot episode.