Sebastian Talks Relationships with Will Malnati on The Drop-In

This is only part one of Sebastian’s interview, so stay tuned for the second part coming next week!

On the eve of the US release of “Captain America: Civil War” hear Will speak with actor Sebastian Stan about managing relationships surrounding a massive premiere, growing up in a conservative home and the type of Uber driver he would be.

Sebastian Talks Stunts and Training for ‘Civil War’ with Philly.com

As Captain America’s best friend Bucky – and as the subsequently brainwashed-by-the-Soviets-to-be-an-assassin-Winter Soldier – Sebastian Stan has been a key character in what is now an iconic trilogy.

With the third installment, Civil War, he is a primary cause of the, uh, civil war, led on opposite sides by Iron Man and the red, white and blue Avenger.

“The appeal is simple,” Stan said at a recent Marvel press event. “It’s a challenge.

“Every scene the Russos [Joe and Anthony, the film’s directors] and I would get together and go, ‘Where is he now? Does he remember this? Does he not? Did he remember that he might have committed that crime or not? So there’s a lot of fun questions with how to play it.

“We saw in the first movie – that’s the [real] guy. Then, this is what happened to him in the second movie and this movie is, ‘How does he live with it now?'”

Stan’s Bucky is in fights with at least 10 characters during the course of the film and he says it was a challenge with the Russos to make each fight distinctive.

“It’s like a dance,” Stan said. Plus, “we just had an amazing stunt team. These guys come from places like Ip Man and The Raid and all those awesome Asian films. So, it’s just a lot of repetition over and over.

Stan said there was additional excitement in the stunt work because he wasn’t wearing a mask.

“I was like ‘the audience is going to see it’s me,’ so I was determined to do as much of [the action scenes] as I could, to the point where I was a pain in the ass to them – but I didn’t care, because I can sit here and tell you that I’ve done 90 percent of those fight scenes. I was even on the motorcycle.” END_OF_DOCUMENT_TOKEN_TO_BE_REPLACED

a child, Sebastian Stan occupied more countries than most people do houses. At the age of 8, he moved from his native Romania to Vienna, and then, four years later, to New York.

Now 33, Stan doesn’t think all that dislocation was always healthy. But it may have given him a certain psychological edge in understanding characters who slip from one guise to another.

“It was hard. You’re inhabiting different worlds, speaking different languages,” Stan said in an interview recently. “But it helped me in a way. When you’re young you just want to fit in. And when you’re older you realize that what it really did was make you OK with feeling different.”

Stan is decidedly a man caught between two worlds in Anthony and Joe Russo’s “Captain America: Civil War.” The new and well-reviewed superhero movie, which begins its U.S. run Thursday night after a massive opening overseas, has Stan revisiting his role as James “Bucky” Barnes, a.k.a “The Winter Solider.” As viewers of the erstwhile film named for him know (and the first “Captain America” before that), Barnes was a respected U.S. military man — and childhood friend of Steve Rogers (Chris Evans) — later brainwashed into working for the Soviets as a kind of human instrument of torture, before (possibly) remembering his roots and seeking redemption.

As viewers of the new film soon learn, Barnes will continue to evolve, as will the significance of his role in the Marvel Cinematic Universe. The character in “Civil War” becomes, owing to past actions, a key fillip in the tension between emerging rivals Iron Man/Tony Stark (Robert Downey Jr.) and Rogers’ Captain America. He is, in a real sense, the pivot point around which all the action revolves.

As Stan eats a burger at a restaurant near his downtown Manhattan apartment on a recent Friday afternoon, he shows little of the prepossession of a man whose actions are about to viewed and scrutinized by hundreds of millions of people around the world.

His long hair hangs straight to his chin, a ballcap sits in his hand and his face wears the kind of stubble that is neither shadow nor beard. A pair of designer-casual shoes are the only hint of someone with a more upscale day job.

Stan recently moved to the neighborhood, and he’s taking a breather from the kind of media siege that wasn’t exactly standard for past roles on the likes of “Gossip Girl,” “Once Upon a Time” and several New York theater projects. In a few days he will appear on a morning show (“GMA”) for the first time and is about to embark on the type of circuit of late-night hosts (Stephen Colbert, James Corden) usually reserved for Super Bowl MVPs

It is a far cry from the actor who, on graduating from a theater program at New Jersey’s Rutgers University, just wanted to stay busy. END_OF_DOCUMENT_TOKEN_TO_BE_REPLACED

Sebastian was decked out in a blue suit which seemed to be a theme with Anthony Mackie and Chris Evans as well as the Captain America: Civil War crew attended the screening of the film in New York on May 4th. Check out photos from the event in our gallery now. 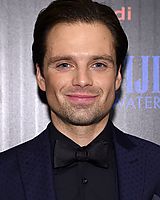 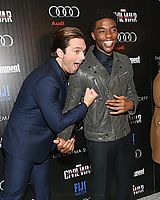 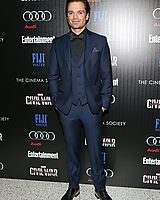 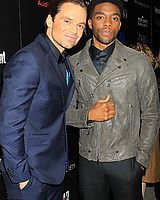 Sebastian was in studio with his Captain America: Civil War co-stars Paul Bettany, Chadwick Boseman, Elizabeth Olsen and the film’s directors Anthony and Joe Russo to discuss the film with AOL Build on May 4th. Check out pictures and photos from the event below: 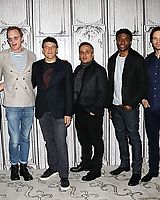 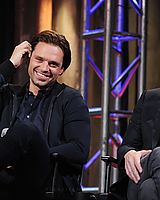 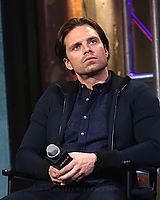 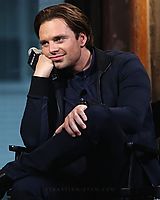 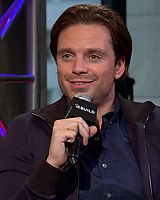 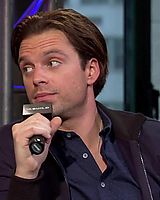 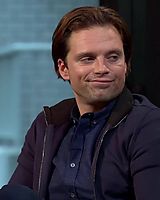 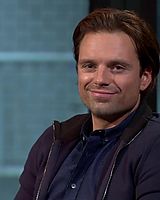 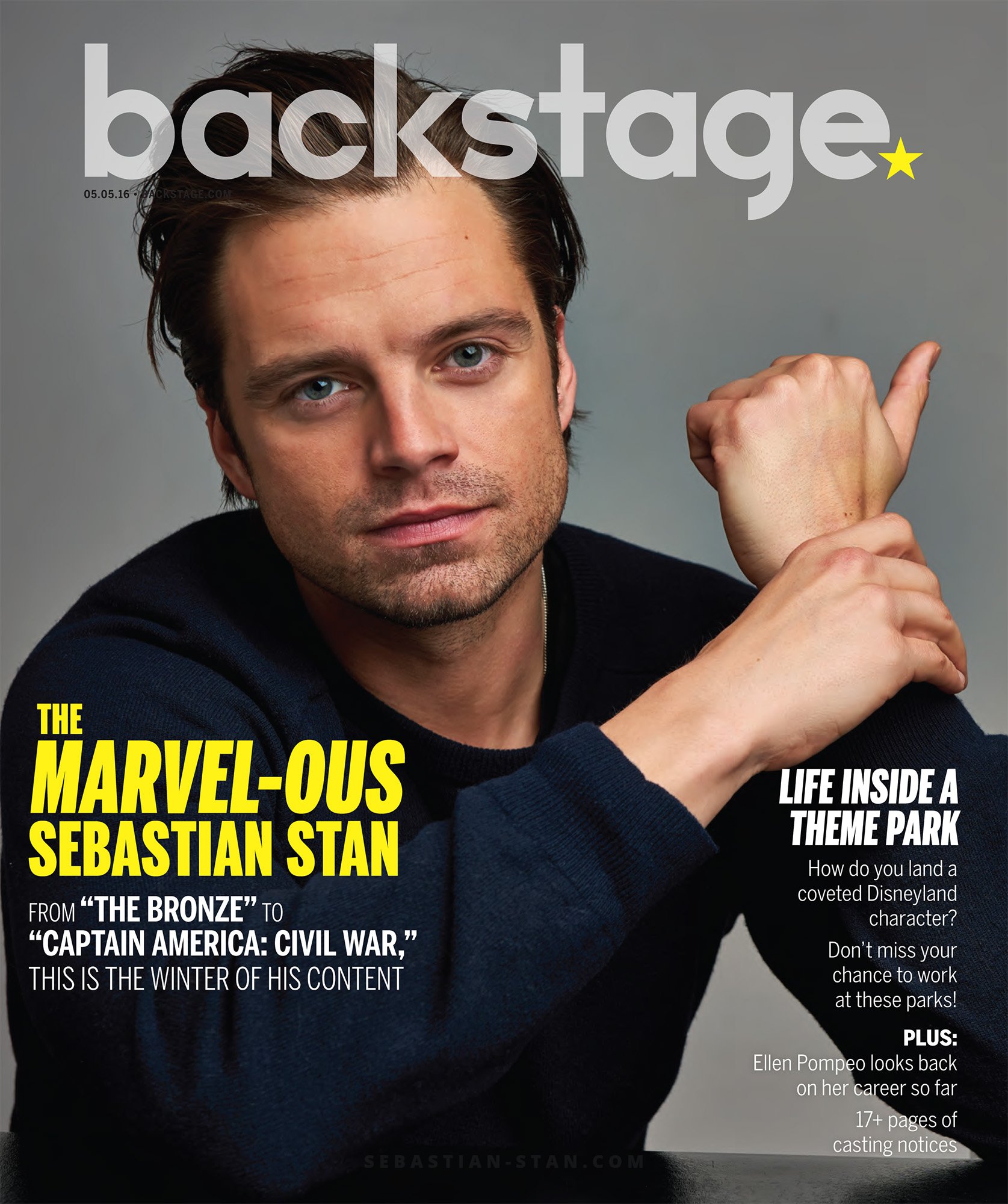 Let’s say you’re playing an American soldier with severe post-traumatic stress disorder struggling to assimilate back into society. For the last several decades you’ve also been forcibly brainwashed to forget compassion and embrace violence to the point of desensitization, but memories of your old life as a decent man begin to emerge. Sounds like a juicy role for an actor, right?

These are the challenges facing Sebastian Stan in “Captain America: Civil War,” the newest comic-to-big-screen installment from Marvel Studios. Don’t be fooled by the whiz-bang action sequences and glossy production values of such blockbusters; actors playing superheroes must flex their acting muscles as much as those in prestige dramas—not to mention their literal muscles, too.

“When I go to work I don’t discriminate it as a comic-book movie,” says Stan over coffee at Manhattan’s the Gander. “It’s full-on commitment. That’s all you can do.” Stan and his Marvel Cinematic Universe co-stars, who include such awards season heavyweights as Mark Ruffalo, Tilda Swinton, and Michael Douglas, are using sheer talent to elevate the ostensibly lowbrow genre.

“Comic-book movies are mythology in a way, and there are a lot more parallels in them with what’s going on in the real world than people want to discuss,” Stan points out. His “Captain America” character, the Winter Soldier (né Bucky Barnes), for instance, is a scarred serviceman without a place to call home; Stan need only look at the state of veterans’ affairs today to take the role seriously. “A lot of these people come back and they don’t know how to function in the world anymore; the world is not embracing them in the same way. That was a big part of this character’s journey in this film: Understanding the world that he’s finally found himself in. How is he going to function there?”

This level of actorly preparation isn’t usually associated with sci-fi flicks raking in billions of dollars. “People have their own stigmas about it,” says Stan frankly. “I know when people are considering me for jobs sometimes it’s, ‘Well, you’re in a comic-book movie.’ And I’m, like, ‘But I’m killing myself to try to do the best I can!’ ”

“Sebastian embodies the notion of a hardworking actor,” says Joe Russo, who co-directed both “Civil War” and the franchise’s second installment, “The Winter Soldier.” “His level of commitment is fantastic. He really finds the greatest level of detail in his performance.” In establishing a middle ground between Bucky and the Winter Soldier, he says, Stan conveys volumes while saying very little. “It’s the hardest thing to do as an actor, to convey emotion and subtlety without speaking.”

Anthony Russo agrees. “He has to come up with such a complex inner life. I think when you see him perform the character you see that, you see the complexity in his eyes and his physicality. He tells an amazing story through all those tools.” It helps that on the big screen, he adds, Stan is easy on the eyes. “It’s that phrase: The camera really loves him.”

According to Stan, listening is one of his biggest challenges in front of the lens. He marvels at Marlene Dietrich’s ability to remain still and allow audiences to project emotion onto her. “The trick is to shut off your brain,” he says. “ ‘Be interesting! Do something interesting! You’re staying too long in the same angle!’ It has to be about courage and you have to deal with that part of your brain that likes to edit and censor you. Maybe some don’t have that. I, however, do.” END_OF_DOCUMENT_TOKEN_TO_BE_REPLACED

Sebastian Promotes ‘Civil War’, Geeks out over Space instead with Stephen Colbert

I’ve added HD captures of Sebastian on The Late Show with Stephen Colbert from May 3rd. Check out a clip of Sebastian drinking Tequila and geeking out over Space. 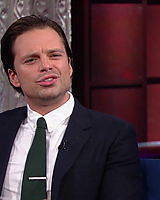 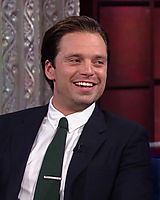 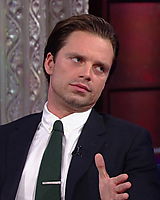 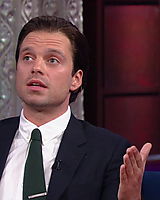 Television Appearances > The Late Show with Stephen Colbert (May 3rd, 2016)
0   |   Leave a Comment
Published by Carol
Page 2 of 8 Previous Page 1 2 3 4 5 … 8 Next Page
Sebastian Stan Fan is a website created by a fan, for the fans and is in no way affiliated with his management, or any company associated with him. All media, photos, trademarks and copyrights are owned by their respective companies. No copyright infringement is intended. Please contact us if anything should need to be removed from our servers.
Posting....