Sebastian is featured in the latest issue of Nylon Guys magazine for the month of May. You can view the scans in high quality over at the gallery now! 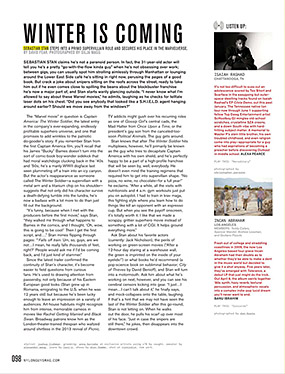 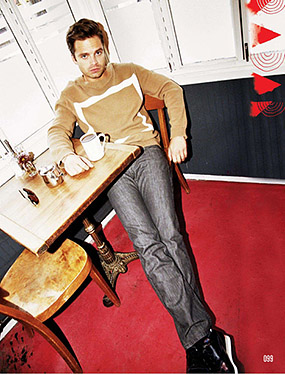 More videos under the cut!

END_OF_DOCUMENT_TOKEN_TO_BE_REPLACED

Sebastian to Appear on Chelsea Lately!

Set your DVR’s guys because Sebastian is gonna be on Chelsea Lately tonight! 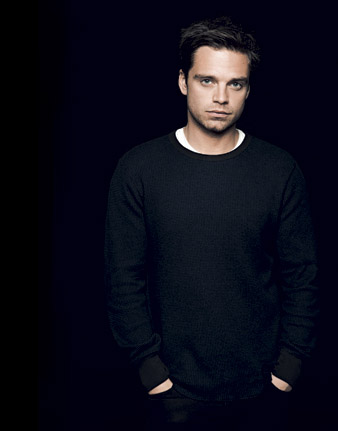 Humble Beginnings
His interest in acting began when his family moved to the US when he was a child. He had a meaty role in teen horror movie The Covenant (2006) but his showbiz career took off only after appearing as a recurring guest star in hit TV series Gossip Girl in 2007.

Career Longevity
Being a part of the huge Captain America franchise means no more bit parts for Stan. The 30-year-old is reportedly contracted to Marvel for nine pictures.

Frosty Villain
Winter Soldier gets into a lot of hand-to-hand combat.

Stand said: “I would walk around the house all day flipping this plastic knife around and practicing my moves. I wanted my movements to feel natural and I wanted to be able to perform these sequences without thinking about it.”

His Inspiration
Stan said he hoped to honour the legacy of great cinematic villains, particularly the late Heath Ledger’s performance as the Joker in The Dark Knight (2008).

Said Stan: “I can’t compare myself to anything like that. He is an inspiration. That was his most memorable performance, the Joker.”

Sweet Guy
Stan may play a baddie but lead actor Chris Evans said Stan is “no way like his reel character”.

“Sebastian is the sweetest guy on the planet! He wouldn’t even kill a fly. It was really nice to have such as good guy on the set.”

‘Captain America: The Winter Soldier’ stars swoop in on Daily News and Disney/Marvel screening for kids of U.S. military members

I have added 5 photos of Sebastian with his Winter Soldier co-star Anthony Mackie from the event into the gallery. You can also read the article and interview with both men over at NYDailyNews.com 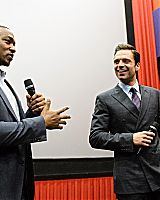 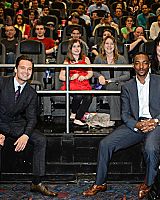 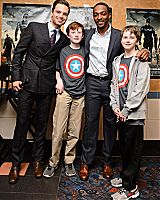 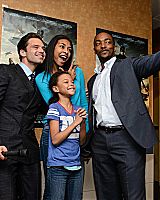 You can read Sebastian’s interview in full over at MovieWeb.com

Going into Captain America: The First Avenger, I have to imagine you were hoping to get a chance to play Winter Soldier. Were they ever discussing plans for that during the first movie, or did they come to you with the story much later?

Sebastian Stan: The whole story was brought to me before we shot the first movie. I didn’t really know where they were going to take the sequel next, or even if we were going to have a sequel, at the time. We were still making the movie, which is why when people start talking about the next film now, it’s the same thing. The movie has to come out, so I didn’t really know, at all. In the script, there were certain things about Bucky Barnes, he wasn’t written linear. There were peaks and valleys and some dark undertones, and that kind of made me feel like this is a chance to show various colors of things, depending on how it’s going to go.

I read you really embraced the training aspects of this, especially with the knives. Even before I saw the movie, that knife fight part in the trailer was one of the coolest things I had seen in awhile.

Sebastian Stan: Yeah, you’ve got to credit our stunt guys. I had this amazing stuntman, James Young, and he was teaching me everything, in terms of the knife training. Yeah, we got into it, because we had the time and we really wanted to get it. It was fun. I mean, Chris (Evans) had been in a number of action movies, but I don’t think any of us had learned this type of sequenced, choreographed type of fighting. This was something that, if there was a shot that would take three minutes, we would break it up and it took awhile. We took advantage of trying to do as much as we could.

The Winter Soldier’s look is so menacing and awesome, and you know right away this guy is bad. It was like one of those Darth Vader moments, where you see this guy and you know he’s the real deal. Can you talk about the actual costume you had to wear and the arm. Was there a lot of bulk to it, or were you still able to move around in it rather well?

Sebastian Stan: There was a lot of bulk to it. The way that the costume came together is it was made from five different pieces, and flexibility was definitely an issues, one we couldn’t have really known, because we weren’t rehearsing with the costumes on. We just saw how flexible we were once we got on set. It was tough. We went through some periods where we ripped a bunch of the costumes, just flying by the seat of your pants, a little bit. The arm was very specific. There were a couple of them, some more mobile than others. The ones that were more immobile were actually the better looking ones that looked cooler, so I always wanted to have that one. By the end, we just really adjusted to that.

0   |   Leave a Comment
Published by Carol
Page 23 of 28 Previous Page 1 … 20 21 22 23 24 25 26 … 28 Next Page
Sebastian Stan Fan is a website created by a fan, for the fans and is in no way affiliated with his management, or any company associated with him. All media, photos, trademarks and copyrights are owned by their respective companies. No copyright infringement is intended. Please contact us if anything should need to be removed from our servers.